se without comedic tastes, the so-called "experts" at MarioWiki have a real article on the mascots. Apparently, they have different names but oh well. George W. Bush, Ronald McDonald, Evil Guy.

These are the pets/mascots that the UnMarioWiki owns (or pwns in nerdy terms). These are the three mascots: George W. Bush, Ronald McDonald, and Evil Guy. Why are those the mascots though? They just are. George W. Bush is the leader of the "Mascot Team". The UnMarioWiki Mascots are planning to make their own movie and video game. No other info has been revealed. Bob the Builder used to be part of this team and was going to appear in the movie and game, but was fired after they realized he was a ninja spy. The team has their own website which is now highly popular. When not going on fantasticalicious adventures, they hang out and have a little R&R (just see their site).

George in all his awesomeness.

Evil Guy and his dancing powers. 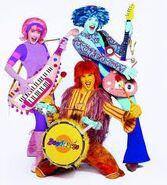 Add a photo to this gallery
Retrieved from "https://unmario.fandom.com/wiki/UnMarioWiki_Mascots?oldid=81930"
Community content is available under CC-BY-SA unless otherwise noted.